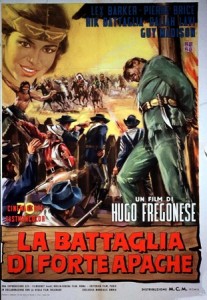 RIZ ORTOLANI CELEBRATES 50 YEARS OF SOUNDTRACKS.
THE SUCCESS OF HIS MUSIC IN A WESTERN THAT HAS BEEN A BOX-OFFICE HIT IN GERMANY SINCE 1964.

A double gala event next 28 July at Berlin’s Hollywood Media Hotel for the 50 years of activity of Karl May Filme and its great producer, and for half a century of film soundtracks from Maestro Riz Ortolani, who in 1964 penned the score of “Old Shatterhand” (aka “Apaches Last Battle”) for the famous German movie studio. The film, an Italian/French/German coproduction by Artur Brauner and directed by Hugo Fregonese, starred Lex Barker, at a moment of excellent acting maturity with a string of about half a dozen Tarzan movies behind him, and is unanimously considered by critics and connoisseurs to be the “first European western”, still a major cult film and a masterpiece of the German movie industry. This is why it has never disappeared from cinema screens, and its soundtrack, recorded by Ortolani from 18 to 22 March 1964 precisely in Berlin with the Philharmonic Orchestra and Choir, remains as popular as ever. Ortolani is highly esteemed in Germany, and it was with great satisfaction that he accepted the invitation to attend the event, which demonstrates even after so many years the great affection and appreciation that producer Artur Brauner continues to hold for him. It was for Brauner that Ortolani also wrote in 1968 the soundtrack for the sumptuous two-part TV epic “The Last Roman” (“Kampf um Rom”), directed by Robert Siodmak and featuring Orson Welles and Richard Harvey. Ortolani, who in 1962 wrote the famous “More” soundtrack for the film “Mondo cane”, nominated for an Oscar award and the first of over 300 written, is currently working on the music for the six episodes of a new TV drama series by Pupi Avati, the director for whom Ortolani composed the background music for “A Second Childhood” in 2010.

Sorry, this entry is only available in Italian.

The magic of “Un Matrimonio” (“A Marriage”)

Riz Ortolani has been selected as the 13th recipient of the Lifetime Achievement Award, to be presented during the closing night gala of the World Soundtrack Awards at the Film Fest Gent on 19 October 2013. Distinguished director Dirk Brossé will conduct … Continue reading →

Riz Ortolani celebrates 50 years of soundtracks
The success of his music in a western that has been a box-office hit in Germany since 1964. Continue reading →

To celebrate a 50 year career, starting on March 27, il mondo di Riz Ortolani makes its debut in stores, a selection by the great composer Continue reading →