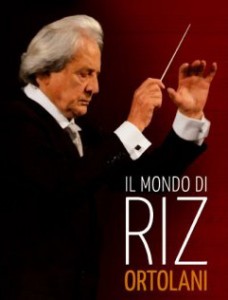 TO CELEBRATE A 50 YEAR CAREER, STARTING ON MARCH 27, IL MONDO DI RIZ ORTOLANI MAKES ITS DEBUT IN STORES, A SELECTION BY THE GREAT COMPOSER

After the publication of the first 10 titles of the series of C.A.M. remastered soundtracks, which came out on March 13th, starting tomorrow, the Gruppo Sugar will publish the special jewel case, The World of Riz Ortolani: 4 CD’s that showcase the first international selection of the artistic career of the great Italian composer. A special issue that celebrates a 50 year career, the Mondo Cane [It’s a Dog’s World] soundtrack (signed by N. Oliviero), with the track More and Il Sorpasso [The Easy Life] sung by Katyna Ranieri. The awards are many for the musician whose career started in 1962. The Mondo Cane [It’s a Dog’s World] soundtrack received the Oscar nomination in 1964 as Best Theme Song, and won the Grammy Award as Best Instrumental Theme. Katyna Ranieri, the only foreign artist invited, sung it at the Oscar ceremony. Just one year later, the composer won the Golden Globe with Forget Domani (made successful by Frank Sinatra) from the movie La Rolls Royce Gialla [The Yellow Rolls Royce], also receiving the Golden Globe nomination for the Score. The second Oscar nomination arrived in 1971 with Till Love Touches Your Life, made a success by Shirley Bassey. More, was recorded over a thousand times by the greatest artists in the world (Frank Sinatra, Aretha Frankin, Nat King Cole, Andrea Bocelli) and boasts over 70 million records sold. In 2007, Ortolani received the Special Citation of Achievement for 7 million BMI Radio Broadcasts in the USA. In addition, he has collaborated with the greatest American Studios (MGM, United Artist, Paramount, Columbia) and with well-known directors such as Vittorio De Sica, Dino Risi, Terence Young, Lewis Gilbert. Noteworthy, is the association with the director Damiano Damiani. (ANSA)

Sorry, this entry is only available in Italian.

The magic of “Un Matrimonio” (“A Marriage”)

Riz Ortolani has been selected as the 13th recipient of the Lifetime Achievement Award, to be presented during the closing night gala of the World Soundtrack Awards at the Film Fest Gent on 19 October 2013. Distinguished director Dirk Brossé will conduct … Continue reading →

Riz Ortolani celebrates 50 years of soundtracks
The success of his music in a western that has been a box-office hit in Germany since 1964. Continue reading →

To celebrate a 50 year career, starting on March 27, il mondo di Riz Ortolani makes its debut in stores, a selection by the great composer Continue reading →